I currently work as an actress, role player and facilitator but I have also worked as a director, coach and presenter. I’ve been actively working as a creative for over 30 years. I trained at the Royal Conservatoire of Scotland and got my provisional Equity card through Scottish Opera for Youth and Community. This outreach company has the ethos of making what is often perceived to be an elitist medium accessible to all by bringing ‘music theatre’ to the wider community.

Along with the musician Helen Tierney we have created Mrs Shaw Herself. It’s a solo show with live music exploring the life of Charlotte Payne Townshend, Fabian, Philanthropist, Suffragist and the wife of George Bernard Shaw. We have performed at festivals including Edinburgh, Bloomsbury, Crouch End, Bury, and in community settings in London and Hertfordshire. We’re now working on our next piece exploring the life of prolific writer Frances Hodgson Burnett. 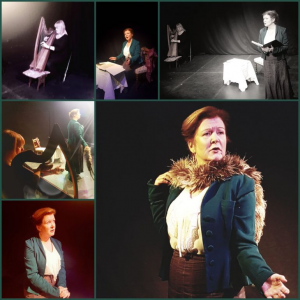 Not so much ‘who’ but more ‘what’. As a child, I loved art and design and was always drawing. So from an early age, I wanted to be a fashion designer. I guess Mary Quant was an influence.

Though I also loved novels and films. I would often be completely drawn into the story and fully engaged in the emotional journeys of the characters. When strong emotions were expressed, I’d feel them intensely, sometimes for days. Unfortunately, we didn’t have any drama at school and there were no drama clubs available until I was in my early teens.

I went to ballet school from around 7 and thoroughly enjoyed that. But I knew I wasn’t cut out to be a ballerina. However, I did keep dancing in contemporary dance with The Greg Nash Group and Scottish Ballet workshops and classes up until I left Scotland.

When I was about 14 I joined The Glasgow Drama Workshop. The school then hired some younger, funkier teachers who set up a drama society. That got me started and I’m so glad I encountered these fantastic innovators, they truly opened up possibilities.

Unquestionably, a performance of Hamlet at The Citizens Theatre in Glasgow was that thunderbolt moment. Giles Havergal, Phillip Prowse and Robert David McDonald came to Glasgow from Watford Palace Theatre and totally put their stamp on the city as a cultural centre. They turned convention upside down, created wonderful, thought-provoking, gutsy, visceral productions with amazing actors. It was like nothing I had ever seen before.

I was in 5th form, we were studying Hamlet, and our fabulous English teacher arranged the trip. I was completely blown away by the production, the acting and the concept of an all-male cast. I loved every minute of it and the memory is still with me to this day.

Giles then came to our school for a Q&A with Scottish actor David Hayman. Here were these wonderful creatives who had conjured this ‘magic’ coming into my everyday world. So I thought, ‘Maybe I could do that and be like them?’ Well, if I needed any reinforcement of my commitment to working in the theatre and becoming an actor, this was it!

What were the 3 biggest obstacles in pursuit of your career?

I continue to find inspiration through some of the amazing stories of those who have battled adversity and come through the other side. Those who have been tested through illness, addiction, poverty, loss, war, famine and have found the strength to survive. People who will speak out for the poor, the oppressed, the unconventional and champion the underdog. Also the support and camaraderie I have experienced from friends and colleagues I interact with on projects.

Also some of the wonderful work I see on stage and on screen. Literature and art never fail to inspire me either. It facilitates seeing the world differently. It allows you to see into their world and gain insight and understanding.

There seems to be less work around in general for us 50+ women, although I sense that there are those trying to redress the balance. The contribution that older women make has not traditionally been recognised. Once you are no longer potential ‘love interest’ roles diminish somewhat.

Being older can increase anxiety levels more and the confidence and ‘can do’ attitude of youth ebbs away. It’s really important to remind yourself to keep going in such a competitive business. Focus on the positives, not the negatives.

Energy levels become a bit depleted too, so it’s vital to recharge and think about your work-life balance, more than perhaps you needed to when you were younger.

Overcoming the feeling that youth is where it’s at and seeing age and experience as a hindrance. The challenge there is to see it as an asset but also keep it relevant, learn new skills, keep up with trends. Keep learning.

It’s never too late! Unless you want it to be! There was a time when traditional drama schools wouldn’t take students over around 32 years of age. That time has passed. I don’t think there is a right age and a wrong age! If you are open to learning new things, are curious and playful, have a talent and really want to be in the business then the only barrier to giving it a go is YOU!

Maybe not idols but certainly people I admire for their skills and ability to deliver truthful, believable performances. I also admire those who have become household names but remain grounded and respectful of others. I respect those who have done well in their careers and want to put something back to help others who may be struggling.

Pick yourself up, dust yourself down, start all over again!

I’d be a strong deep, zany purple laced with a delicately fizzing silver.

Don’t miss a chance to see Alexis perform Mrs Shaw Herself at Watford Fringe on 12th and 13th of October. Or connect with her on Twitter and keep an eye for more information about shows in your area.