I’m an actress and more recently a Blues singer. Last month I received Screen Nation’s TrailBlazer Award at The May Fair Hotel.

I was brought up in two rooms near Euston before moving to a council flat at the age of 10.  When I was a child, on Saturday mornings I went to Italia Conti Academy of Theatre Arts as my mother thought my Cockney accent needed watering down. As a result, when I was 7 I made it to a film called Johnny On The Run for the Children’s Film Foundation, directed by Lewis Gilbert. This was my first taste of showbiz.

Later in life, I abandoned French studies to do a Drama course and so landed a part in a West End play with Alec Guinness. For this play, I was nominated the Most Promising New Actress by the Sunday Times drama critic Harold Hobson.

From there on, I went to the National Theatre to play a leading role in The National Health by Peter Nichols. I played Melanie, Meg Richardson’s adopted daughter, on TV in Crossroads. I worked for Ken Loach, so I had a good start and most roles weren’t defined by my colour.

For 20 years I was joint Artistic Director of the award-winning Rosemary Branch Theatre in Islington. My career has embraced theatre, TV, films and radio. I also wrote and performed a highly acclaimed one-woman show about Mary Seacole, a Jamaican/Creole doctress who treated soldiers in the Crimean War.

Being the only child (or indeed thinking I was the only child, but that’s another story) I remember spending a lot of time under the dining table, playing with my dolls and making up stories. I also had three puppets and would perform puppet shows to myself, acting out all the characters. My long-suffering mother was frequently asked to join me.

I sometimes made plans with Hillary, one of my friends, to open a hospital for animals. But I think in my heart I knew that I wanted to do something to escape into another world. At that time, I was one of two children in my Primary school who weren’t white (the other child was of English/Indian heritage). Although I didn’t voice it, I was very aware of being different, so I enjoyed being in a world that was make-believe.

Probably being in Johnny On The Run. Although I missed my mother (we filmed in Scotland), it was so exciting. I went on a plane for the first time, the scenery was beautiful and I enjoyed the acting. Everyone was so friendly and it was like being in a family.

I love observing people – their quirks, mannerisms, speech, etc. I try to file things away for future use.

I love walking, especially in the countryside. When studying for a role I often go for long walks whilst mulling over the part. I find nature very inspiring and indeed, music.

The perception that we are ‘little old grannies’ wearing twinsets and pearls. I’m now in my 70s and have lots of energy. Many parts for women of my age show us as being asexual, unattractive, decrepit and retired. Also particularly when auditioning for adverts.

Many directors, agencies and producers seem unaware that there are Black/mixed race people of my age who were brought up in Britain. They tend to stereotype older Black women as laughing and having a thick Jamaican accent. 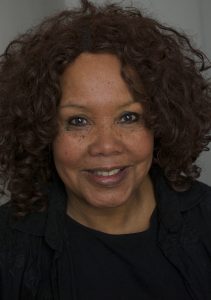 I started up my Blues Band when was just reaching 70. I thought ‘I’ve always loved Blues music, but never done it. I don’t want to be on my deathbed wishing I’d had a go.’ (I had made a record whilst at school with the then-unknown Rolling Stones). So I got my band together.

Last year we played the foyer at Queen Elizabeth Hall, Southbank Centre, closed the South Stage at Ealing Blues Festival as well as gigs around London.

I don’t have idols as such, but I do have many people I respect and admire. From people like Wangari Maathai, an environmentalist who was the first African women to win the Nobel Prize, through to Bessie Smith and Nina Simone, who fought against racism and stood up for themselves, and my mother, who had an extraordinary life, and, of course, David Attenborough.

My mother always used to say ‘Do unto others as you would unto yourself.’

I would be a golden bronze. Golden because I associate it with the sun, warmth, encouraging growth, and bronze, which, to me, represents the earth where my roots are bathed by the glow of the sun.

Catch Cleo at one of her upcoming shows – Our Town at The Open from 16 May, Rotherhithe Festival on 13 July (as Honey B Mama), and Ealing Blues Festival on 21 July.