I am a dancer and I’ve been dancing (including training) for almost 50 years. However, for most of this time, I was dancing semi-professionally, part-time. I often made money from dancing, performing and teaching, though I always had other sources of income.

I have to admit that I had a love-and-hate relationship with dance. So the reason for taking part in this project is because I ‘found myself’ as a dancer only when I was already over 50. And now, that I’m in my late 50s, I’m shifting towards performing and choreographing more: 20% of my activities were always related to dance, but now I’m flipping that around and trying to make it 80%. I even applied to do an MA in Dance: Choreomundus an international course focussing on intangible cultural heritage.

What’s even more interesting about my career is that the genre that I fell in love with is whirling, a traditionally male-only territory and a ritual activity. And by internalising the technique and experimenting with nudity and naked flames in search of eternal goddess in some of my pieces I’ve gone down the iconoclastic route. And I’ve never felt so empowered, triumphant, glorious and humbled before. I do relate the lateness and the depth of discovery to age.

Posted by The One Dance and Whirling Wizzard on Friday, 28 December 2018

I never wanted to be a dancer. When I was eight I fell in love with writing. I was bookish and academic – I prized these qualities above all others. However, I was aware of my physical attributes too – extreme agility and suppleness.

My mum was a PE teacher, and it was her idea for me to apply to a professional ballet school. So at the age of 10, I started classical training, which in an ‘Eastern Block’ country in the ‘70s was brutal and abusive. It had the ‘break them to make them’ mentality. And I most certainly didn’t want to become anything like the ballerinas I knew. Many of them repulsed me. The whole concept of prancing in pink tutus and pretending to be a fairy while your feet bled  seemed artistically fanciful to me (or inane, if my pen was still dipped in the fury of my adolescence).

I must have been over 28 the first time I saw a dancer/choreographer that I could unreservedly admire and would aspire to be. (By then I was already living in the UK but as a stateless person and a single mother of a mixed race child.) This dancer was Germaine Acogny and she herself was already over 49 when I first saw her award-winning Awakening.

The first time I realised that I found a dance style that I can identify myself with was when I started doing Afro-Caribbean and African dances. I trained with the Kokuma and Adzido troupes and learned from teachers like Clarence Thompson and Germaine Acogny herself.

I was a club-dancer (go-goette) at the Fridge, where I used to incorporate afro moves into my style. I danced until I was 7 months pregnant (and for this single act I remain a Brixton legend to this day). I then completed a year of professional dance training (while fully breastfeeding, with the help of an on-site crèche. Unfortunately, they don’t exist in higher education anymore.)

But then I wasn’t accepted as a dancer to the Adzido troupe because I wasn’t black. I couldn’t travel abroad to train with Acogny because I was stateless. And later on, when I choreographed a number of short pieces and sought Arts Council funding, I was advised that grants were only available to people who toured. I couldn’t do it with a small child either.

I’ve already mentioned some obstacles that I faced in the past. Most of them proved insurmountable at the time and that was the reason why I gave up the pursuit of a full-time professional dance career. I  trained as a conference and legal interpreter instead and kept dancing part-time.

In the early 2000s I built up a little community dance school teaching oriental dances  which often lost me money. But because my other job was a freelance one as well, I just wrote them off.

It is through oriental dance that I discovered Egyptian tanoura, the first whirling style I tried and I’ve never looked back. I did most of the hardcore training by myself, in my living room: for a year I turned every single day, even if just for 10-15 minutes. I then trained with the West London Lodge of the Mevlevi dervishes which was deliberately a brutalising experience but at the end of it I was initiated as a dervish. I also had intensive private sessions with Osama Mimi Farag and Ziya Azazi. They constantly criticised me and so did  other men on the whirling scene related to this intersectionality of gender and age.

My biggest whirling inspirations remain Mira Burk and Ziya Azazi despite his often hostile attitude towards me. I’ve also grown so far in technique and repertory that I can confidently hold my own and stake my claim to an independent niche within world of whirling.

Male turners who publicly perform and teach often showcase masculine vim, vigour, speed and strength whereas my style is slower, more complex and has an emotional touch.

Interestingly, I find inspiration and encouragement yoga too. I’ve been practising for about six years now and I’m currently training to become a yoga teacher. I have performed whirling at a number of yoga events. Most of my yogini sisters and brothers are extremely encouraging when it comes to the aspect of age. They tell me that I’m an inspiration, and indeed my intention is to blaze that goddess trail for others.

There are physical challenges that come with age. I embraced my limitations and they brought me closer to other people who struggle with physical stiffness and bodily self-expression. This is very helpful when I teach. I also had to learn to be more consistent and gradual in my practice.

There are social stereotypes that can be challenging too. It’s inevitable. I most certainly notice them but I don’t get upset over them. Although I find it astounding how rude and brutal people can be about age, especially since I’ve grown out my silver tresses. But instead of fighting this battle, I chose to concentrate my energy on finding niches where I can flourish.

And of course, one of the greatest worries everyone has, but especially women without a pension, is financial insecurity. The dread of not being able to work and earn money, be dependent on others and losing control. Hence why I have my fingers in several pies – I’m freelancing, I have a lodger, and with the dance MA, I will hopefully have a potential income stream from academia as well. I also have plans for becoming a lifestyle guru and weave the web of the dreams I create with my whirling further, wider, into more dimensions: nourishing body and soul, make the carpets and tapestry of the she-shed fly.

It’s never too late – I’m the living example. I’d give the advice to all artists and creative people at any age, but especially of those over 50 – create the dance, the book, the dish or the space you want to see but you haven’t yet… Add to life what you feel it’s missing, add your flavour… 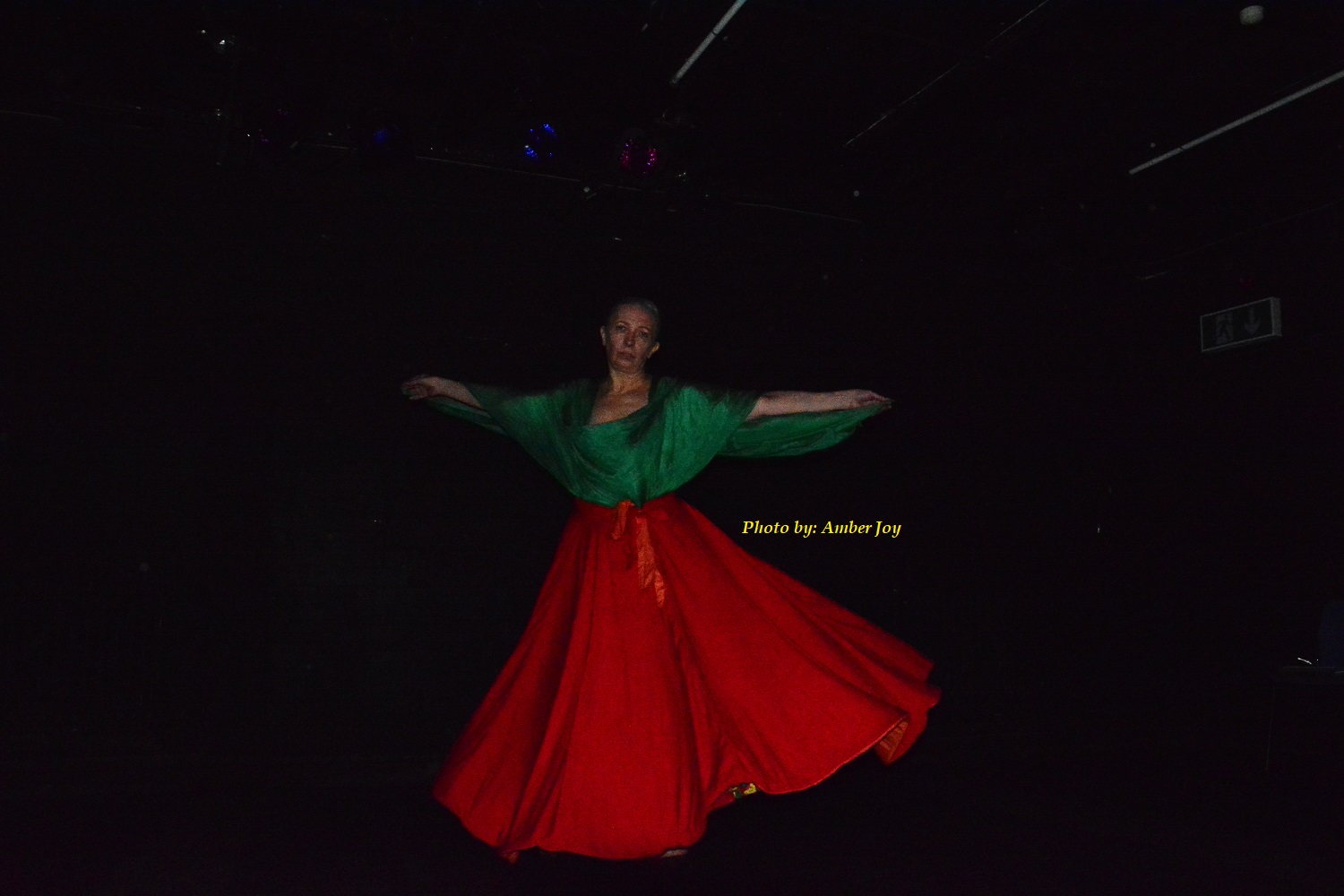 And of course, if you start working on commission fit your vision around clients’. Though hopefully, clients will approach you first, simply because you inspired them!

I used to say: ‘I’ll write my book by 35 and then I’ll die’. Now, if I could transpose the depth, anguish and wonder that I experienced in the words of these artists into my whirling, I’d be grateful.

“Who said we only live once?” – would be my motto, however, trite and unfunny this might sound. Because I’ve had a life, a few lives, and they keep coming. I keep living lives in a handful of parallel universes. Happily or otherwise, but this is what we, over 50s, do – we don’t extend, we multiply our lives. We carry on…

Shades of indigo, purple and maroon. The title of my last performance: ‘Breaths in blue, black and red’.