I am a street performer, actor, compère, director and tutor. I’ve worked in the industry for 30 years and I love anything that makes me laugh!

I’m originally from Derry, N. Ireland, but I came to study in England in 1981. After a number of random jobs, including training as a manager in Harrods and falling asleep at my desk, I finally trained as an actor. I then worked in theatre, did a few TV commercials, some obscure films and toured with a theatre company around Australia. Randomly I was also the voice of Ivana the Lioness for ‘Creature Comforts’.

I continued to act but started to diversify into street performance and learned new circus skills such as tumbling and trapeze. With Rintintin, my street theatre company, I’ve worked at various events and festivals throughout the UK and overseas.

I still have masses of energy to dance on stilts, perform comic characters, create, teach and direct. However, if I went on a trapeze I think I’d need the fire brigade to get me down… some things are just harder to get your leg over these days.

I don’t think I wanted to be any one person, but what job didn’t I want to have?! I think I went from doctor to electrician to opera singer. I didn’t have a clue what those jobs involved but I wanted to try everything.

I know I did contemplate being a clown for a while. But mainly based on someone telling me that this way I could run away to the circus. 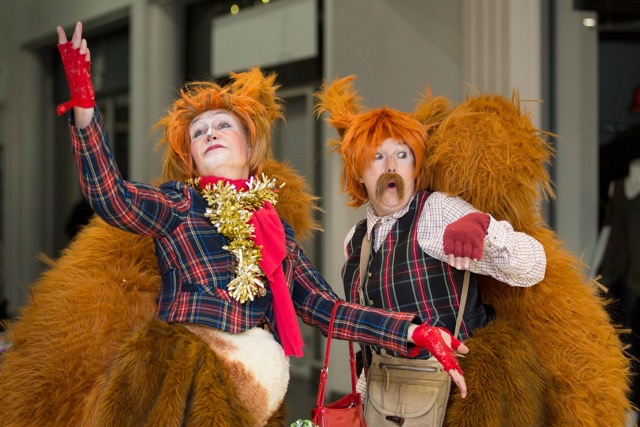 I also remember my father and cousin being in the local operatic society and as a toddler my mother holding me up so I could watch them through a window. I still remember a vision of colour, bright lights and men in dresses. I think it was The Mikado

Sadly my mother died at 51. I was 19 back then and soon after she died I started writing endless, and I mean ENDLESS, and pretty rubbish poems. One day I was looking for a quiet space to “write” and I sat on a bench in a theatre foyer. It sounds clichéd but I felt safe there. It had a real sense of home. I think this was really my light bulb moment.

However, going about it was more difficult than I thought. In my mid-twenties I finally paid my way through drama school. On my evenings and days off work, I still trained as an actor with London Quayside, a company created by a small group of amazing E15 professionals. They gave potential actors a chance to train while continuing to work. These were my first steps into the profession.

This training was followed by Lecoq, the National Centre for Circus Arts Space, lots of hard work and, of course, lots of driving.

I’m a real observer and I genuinely love people. All the characters I create are a comic twist on a combination of people I’ve seen or know and all the mad things we do. From My Dancing Irish Tea Lady on Stilts (most of my Irish aunties) and Havana Clue Comedy Fortune Teller (my friend’s mother and Margarita Pracatan) to Gwyneth Poultry and The Green Egg Farmer (speaks for itself) – they’re all there.

I also can get totally absorbed in books, independent films and art installations. I also went through a stage of not finishing books as I didn’t want the characters to disappear. Bonkers!

As a child, I religiously watched the Lucille Ball show. I subconsciously have the sort of wink on a punchline, which I’m sure I picked up from her years ago! How lucky was I to have her as a role model – a funny woman heading her own show in the 1960s.

I do sometimes feel the pressure of “getting on a bit”! But sod it! I’ve never followed a straightforward route and why start now?

I’m a believer in lifelong learning. And although some things are not as physically easy as they used to be, there are so many other options that can still be explored. The idea that once anyone hits a certain age it’s time to “slow down” doesn’t make any sense to me. There are so many amazing people even into their nineties doing fabulous things.

I also think it’s especially important that younger women see women of all ages working. This instils into them that they have the same longevity in their careers as men. Let’s face it, I have a long way to go… “look at Tina Turner.” She’s been our benchmark for years and she must be about a 100 by now. 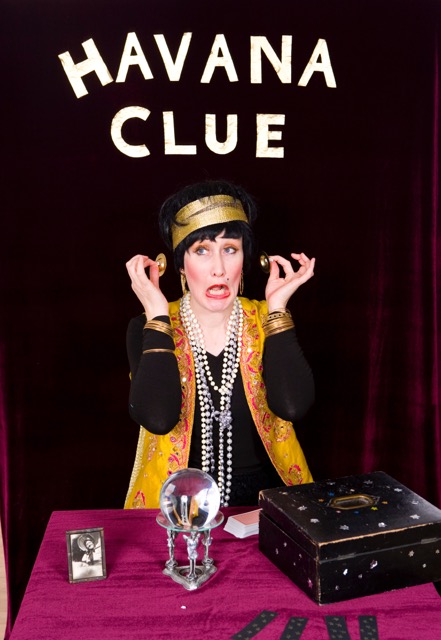 It’s never too late and can sometimes be too early!

In my late 40’s I went to Goldsmiths to do MA in Performance Making. It was very challenging but it was equally positive and inspiring. If I had done it earlier it wouldn’t have been supported by heaps of life experience and knowledge, which just seemed to connect everything together.

Also, I think that you have to take every opportunity to work with the best. Stay strong and committed. And surround yourself with supportive peers and friends. You should enjoy every minute you are working.

I don’t have any particular idols, except… I did meet Madonna once. When she said, “Hi, how are you?” I was so shocked that when I replied “Hi, I’m fine, thanks” my voice was so high pitched it could have been attributed to a mouse being strangled in a bush. I was a big fan back in the ‘80s.

So, no idols but there are so many people I admire, in particular, women of strength and courage. Those people who throughout their lives have challenged the status quo and made us question our views and choices. I include my mother in this – she taught me to never give up.