I am a theatre-maker – a director, performer, writer, workshop leader and mentor. I started out in a feminist cabaret after graduating from the University of Hull, Drama Department, in 1982. Alison Goldie, two other friends and I took a sketch cabaret to Edinburgh Fringe. It was called ‘Heavy Periods’ and was based on a book of cartoons by Fanny Tribble. I kid you not.

As soon as we moved to London, Alison and I became ‘The Wild Girls’ comedy act. For three years we cavorted around the dingy clubs and pubs of London and beyond. Sporting spiky hair, big earrings and bags of attitude.

Much later, in 1997, Alison and I created ‘The Weird Sisters’ theatre company. We toured the UK and international fringe festivals with our self-penned, multi-character comedy dramas.  We made little money but had a ball and won five theatre awards in the process.

In 2006, I created a solo show, ‘The Mother’s Bones’, which won a Manchester Evening News Award for Best Fringe Performance. The following year I launched the ‘Authentic Artist’ workshops that have been running ever since. And my latest venture is my solo show, ‘InVisible Lines’, which will take place in Assembly Roxy, Edinburgh, this March.

I had a bit of a penchant for Isadora Duncan. And Greta Garbo. And Joan of Arc. And Eliza Doolittle.

I haven’t had one consistent career. After the ‘Wild Girls’ I did an MA in Women’s Studies and a PhD in Victorian Poetry. And I taught English and Drama at the University of Southampton for eight years. But during that time I met Jonathan Kay, whose workshops stirred my soul and reminded me of my love for performing. I left my academic career when I was 37 to become a Weird Sister. I’ve never regretted it for a moment.

More than 20 years later, I am often surprised that I have survived as a freelancer in this unpredictable and often poorly paid career. But I love my life and I wouldn’t swap it for anything. I have freedom. And I am inordinately grateful.

I suppose in my 40s I fancied doing more ‘straight’ theatre roles, classical stuff, Greeks and Shakespeare, but my lack of a conventional CV and training may have held me back.

Other than that, I’ve really made my career by doing what I wanted, with whatever resources were available. I can’t really think of many obstacles.

I’ve been incredibly fortunate to work with many artists who have received Arts Council or Creative Scotland funding. I feel a huge responsibility when I work on a funded project like I have to make something worthy of that public money.

My mentors, Paul Oertel and Nancy Spanier, are constant sources of inspiration. They are US artists living in France, whom I had the good fortune to meet in 2003. They are the deepest, most extraordinary, most generous people and I’m eternally indebted to them both.

Paul’s focus on the uniqueness of each individual’s gifts profoundly influences the pedagogy of my ‘Authentic Artist’ workshops. His endless challenges also keep me deep-diving! And Nancy is a great maker of dance theatre and film, who is in her mid-70s and vibrantly alive, focused, passionate and brilliant.

I’m also continually inspired by the work of members of the Authentic Artist Collective. I have been blessed to work with an extraordinary array of singers, actors, painters, musicians, filmmakers, dancers, puppeteers and poets.

I am very inspired by the human body. My latest show, ‘InVisible Lines’, insists on the ageing female body as a thing of beauty, defying the way it’s reviled in contemporary culture.

It can sometimes feel as though certain opportunities are only open to ‘emerging artists’. Or that the programming of some festivals or venues is focused on younger artists at the expense of older makers.

There are challenges as my body ages and I can’t, or don’t want to do things I once did! But I do my best to stay strong, flexible and healthy.

When I was in my early 20s I told myself it was too late to start learning piano. If I’d done it then, I would have been playing for over 30 years by now, and I might even have got quite good at it.

And I might repeat the phrase my mother often uses: ‘Follow your star.’ It’s a beautiful and empowering suggestion.

And of course, if you start working on commission fit your vision around clients’. Though hopefully, clients will approach you first, simply because you inspired them!

Not so many idols, but certainly people I admire and respect for their honesty, boldness, authenticity, kindness and deep spirit.

Get on with it.

A blue-green-turquoise with flecks of silver, because I love all those colours and because the silver adds a hint of moon. 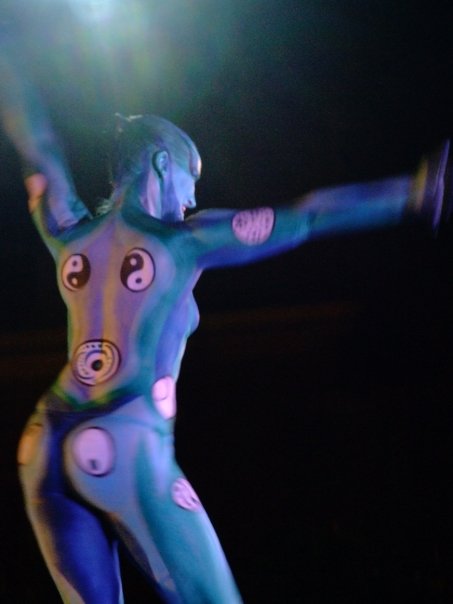 Don’t miss a chance to see Kath’s thought-provoking show – ‘InVisible lines’.  13th to 16th of March, Assembly Roxy. More information and how to book can be found on Assembly Festival’ page.