I started dance life in the ‘80s as a Wild Wiggler, a dance cabaret act, touring in pubs and clubs supporting punk bands, appearing on Saturday morning children’s TV, and supporting The Stranglers at Wembley Arena and other equally gigantic venues.

I studied Rudolph von Laban’s Modern Educational Dance in the UK in 1970. In 1980 I decided to train at the Nikolais/Louis Dance Theatre Lab in New York. Then with Hanya Holm in Colorado Springs, and later with Hilde Holger, a Viennese expressionist dancer who, in her 80s, was teaching in London.

I was a late developer. Most dancers are hanging up their leotards by the time they hit 30. I’m now described as the ‘grand dame of anarchic dance’. I call myself the ‘enfant terrible of the bus pass generation’ or ‘The Mistress of Stamina’.

My work is framed by contextual research that uses the personal and historical as reference. For the past 40 years, I’ve been re(de)fining my own brand of performance, dodging categorisation and being classified as unclassifiable. As a mature, solo, feminist artist, I use the space to ‘act out and act up’. I revise attitudes and preconceptions about mature female visibility, de-familiarise the codings of femininity. I hold a mirror up to the invidious nonsense, name-calling and restrictions perpetrated to limit female expectations and aspirations.

I was born in a post war repressive era in the London suburbs where parents were truly in charge and children were seen and not heard. I never had a clue who I was, or what I wanted to do, I just knew I wanted to be seen and heard.

I liked running about, playing with bats and balls, hanging upside down, making noise, dressing up, having fun, and going out. I loved playing tennis and fancifully thought one day I might win the ladies singles title at Wimbledon. As a keen swimmer, I also thought I might swim The English Channel!

Interestingly enough, I made a solo The English Channel when I was 60. From then on my performing and international touring career moved on from “pretty damn good” to “brilliantly excellent”. 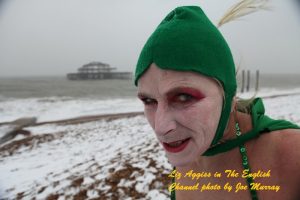 When I was 60 I finally realised that under no circumstances could I stop developing my creative practice. It was always going to be my life. I was an artist. And I could say the words ‘I’m an artist’ without imposter syndrome creeping in. Better late than never!

I’m inspired by the many solo female inter-war expressionist and grotesque dance artists who defied the expectations of their class and gender. They survived despite the turmoil of war. It is their personal archival histories, when placed alongside contemporary feminist politics that compels me to create a relevant performance context. With limited documentation available, I ‘recover bodies from the library.’

I reposition these ‘cultural carriers’ into my contemporary practice as a metaphor to redefine the ‘(in)visibility’ of the mature female artist and resuscitate their, and my body into contemporary dance and live art. I create an invisible umbilical cord to these ‘recovered bodies’ and tug on that connection to see what visibility emerges and how it reacts and influences my contemporary feminist practice. Recovering bodies from libraries is part of the aesthetic that informs my work as can be seen in my solos Survival Tactics, Guerrilla Dances, The English Channel and Slap and Tickle.

Since I unwittingly entered performance via dance, rather late in the day, this ageing, fleshy, sweating, swearing body is an active provocation in its own right. I’m not the object of desire. Though I nod to seduction and sensuality, I’m a subject of invention. From a feminist perspective, I represent politics in the flesh.

The content of my work is refreshing, well researched, visual, accessible, funny, and has broad demographic appeal. My work has caught the imagination within current sexual politics that refutes the dominance of a certain kind of normative female body. It opens up the possibilities of staging a devious ‘unbound’ body that meets the audience’s gaze with active provocation.

Now my biggest challenges are:

Performing two shows back to back on concrete whilst wearing stilettos in 95-degree heat at the Women of the World Festival in Rio de Janeiro was doable, but a killer. As is getting off long haul flights and being immediately fabulous. As is performing very late-night shows. I’m more of a matinee kind of girl now. 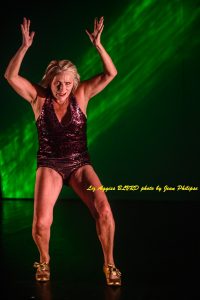 Don’t listen. Get on with it. It’s your party and you can cry if you want to.

The following dance artists: Valeska Gert, Hilde Holger and Kazuo Ohno are my silent mentors and invisible chums. They sit on my shoulder during my creative research and development. I ask them questions when faced with complexities. They help me process.

When I saw Kazuo Ohno perform he was in his 80’s. When I studied with Hilde Holger she was in her 80’s. When I discovered the grotesque dance art of Valeska Gert she was dead and I was 33, just about to embark on my solo dance career. Their unashamed, unafraid, expressive bodies have left an indelible legacy on me. They all took me on a journey from which I have never recovered. They offer an alternative view of beauty rooted in the acceptance of age, love of life, and a love of dance that transcended boundaries.

What are you waiting for… permission?

Never run around the stage in circles for no apparent reason. Nobody wishes to see that!

The colour of caked make-up combined with the glow of sweat caught in facial wrinkle crags. What’s not to like?