I’ve been a stand-up comedian, cabaret and comedy burlesque performer for 16 years now. I started all this in San Francisco when I was 70. At the time, I had no idea that stand-up comedy was a career. I had done some amateur performances on stage and had two Public Access TV shows in Pacifica, California, but doing an on-stage solo performance was absolutely the furthest from my mind. I just knew I was good at writing and telling my own jokes. I had discovered something that was fun to do.

I wanted to be a wife and a mother. I wanted at least 12 children and wanted to live in the suburbs as a stay at home middle-class housewife who did laundry on Monday, cleaned the house on Tuesday, went to my psychiatrist on Wednesday, had my hair and nails done on Thursday, Friday the family came over for dinner, Saturday I went out with my husband who adored me and Sunday I complained. All this didn’t happen to me and it was the best thing that COULD have happened! I’m a happy lady.

I was 70 years old and this was a great thing to do that didn’t cost money. I have lived below the poverty level most of my life. I cannot afford to pay for the theatre or concert tickets. I began to notice comedy was a career about the third year in because I was getting paid for it.

The punch in the stomach was when I realized that I had to fight to get gigs, even those that didn’t pay because I was an old Jewish white woman. This infuriates me still. No matter how funny I am (still), I cannot get booked easily, and if I am booked I am the lowest on the totem pole.

I think not being on TV, not having money and not having an agent. Money is the biggest obstacle. I couldn’t afford expensive production costs or PR. There is an older woman in San Francisco who is abysmal but she is very rich. She has paid thousands in instruction, thousands buying her way into big venues and thousands in travel etc. No one wants her, but her money gets her that first shot. I’ve always said, “If they hear me once, I will get into the magic circle”. That’s not true. My name isn’t big enough to sell seats. It’s a catch-22 situation. If I cannot get gigs, how can anyone see how capable I am? How can anyone know about me when I am the last one booked and have no publicity about me? 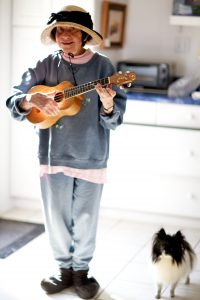 Within myself. I was very rejected as a child and an adult, and have always been an over-achiever. I keep telling myself — if you try hard enough, you will get there. And so I do. (I always try harder but getting there only happens occasionally.)

My age and sex make me an undesirable. I cannot tell you how many gigs I do where I’m the only woman… and how many I attend where the people are simply not funny and cannot tell a joke but they are the headliners and the highly paid openers. There’s almost no one over 70 on those stages and I have not come across anyone who is 86… yet.

You know inside you if this is something you REALLY want to do. I knew the minute I got on stage that telling jokes to a bunch of strangers is what I want to do. I didn’t think “Oh boy I will make a lot of money or I will get on TV or I will be famous.” None of that. I thought “OMG I LOVE this.” Once you get that feeling, go for it no matter how inappropriate you think it might be. After all, the only thing you have that is all yours is your life and it’s up to you to make it into something you love. 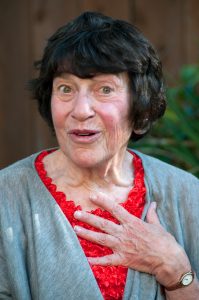 I have a lot of idols: people who have worked hard and earned the success they have achieved. The list is endless and many are people you have never heard of. I love brave people who go after what they want. I have no patience for whiners or people who think they are victims. Life is like a card game. We all get different hands, but the trick is to play out the cards you get the best you can. That is the challenge. That is the motivation. I do not believe in failure. The one thing that makes me want to kill is hearing some defeatists say, ”Well, that is the way it is.” We have control over “the way it is.” And we can change it. I despise pity, especially self-pity.

It’s a saying that I love:

Use what talents you possess; the woods would be very silent if no birds sang there except those that sang best.

Perhaps I would be a strange shade of purple because of that saying: “When I grow old I will wear purple.” I always say “But I wear purple now. What will I wear when I am old?”. I guess it would have to be yellow because I’m determined to shine.

Find out more about Lynn Ruth and her show dates on https://www.lynnruthmiller.com/. You can also connect with her on Facebook at Lynn Ruth Miller.