I’m an actor, director, writer, and I also teach Performance Making. I live and work in Melbourne, Australia, and I have worked in theatre for 35 years. I work as an actor in theatre, film and TV, but I mostly create my own work with various teams of collaborators.

In the ‘90s I was in a group called Crying In Public Places – we sang acapella songs and made theatre shows – sort of self-reflective cabaret things. We toured around the country and South East Asia a bit. Then I came to the UK, went to Edinburgh, had loads of fun.

After the band broke up I had a child and ran a small theatre company in Adelaide, South Australia. I came back to Melbourne with two children and started working in a Burlesque show produced by Finucane & Smith. Spent the next decade doing arty theatrical striptease, though there was more art than a tease. ‘Retired’ that work when I turned 50 with an autobiographical retrospective called ‘My Life in the Nude’. I keep getting asked to do that show, so haven’t really managed the retiring part yet.

I didn’t really know. I grew up in Western Australia in the ‘70s. It really seemed possible that we could drop out of the world, live on ‘the dole’ and surf all day. That illusion only lasted a decade or so. By that time I had caught the theatre bug and was determined to be an actor.

I don’t think I had a ‘punch in the stomach’ moment. I graduated from Drama School (Victorian College of the Arts, Melbourne) and started making shows with some colleagues straight away. This was what I wanted to do – make my own work, but at that stage, there was a bit of a divide between independent artists and ‘the industry’. A bit like you made work because you couldn’t get work.

I never considered myself ‘beautiful’ or in other words, I don’t have a particularly ‘marketable look’. However, I got an agent and kept getting little bits and pieces that kept me in the game. Sometimes I think I’m still here not because I was very successful, but because I wasn’t very unsuccessful. It kept working out alright. I had enough to sustain my interest and my livelihood, so I just kept going. 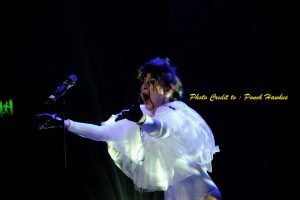 I’m inspired by other artists, their work and their ideas. I teach, and I’m constantly inspired by my students. I read a lot too, I love science fiction. I’ve even subscribed to New Scientist.

Hmmm… none. I love being 50+. I’m no longer judged for what I look like against the flawless complexions and perfectly coloured hair. I’m allowed to be who I am and being myself enables me to do better work.

I used to strive so hard to find a character. Now I just let the character be there. I used to think I had to be incredible. Now it’s enough to be truthful.

Investigate your reasons for wanting this, because it can hurt like hell being told ‘no’ over and over again. Then I’d say – aim high.

At this age, I’m so much more equipped to do big things. When I was young I didn’t know what I wanted to do, I didn’t know how and so I thought I could do anything. I’m timider now because I know how hard things are. I struggle against that.

Don’t settle. Push forward to make the work bigger and better, find more audience and get the gigs. I have such a lot of capacity and the only thing that really gets in my way is my own brain and thinking about what’s possible and what’s not.

Elizabeth Burton. She was a stripper in Kings Cross in the ‘90s when I was in the queer performance scene there. She has lived an extraordinary life and is the most generous, wise, warm-hearted wonderful person. She taught me that what’s important is to love what you’re living in – your body.

Just go a little bit further before you turn back.

I would be a warm grey. Unobtrusive but essential. Well, that’s what I’d like to be!

Maude has recently directed ‘Gender Euphoria’, a show with the largest trans and gender diverse cast ever assembled on a mainstream stage. You can see it on 15-20 October at Melbourne Festival 2019, at the Famous Spiegeltent at the Arts Centre Melbourne Forecourt. For more information click here.