I’ve been performing on stilts and roller skates for 21 years. I perform as a rollerskating Christmas pudding, Snow Queen on stilts, Queen of Hearts, peacock, butterfly and loads more. I also have a huge giant Kraken and two jellyfish props that are 15ft tall. I’ve also performed with fire: fighting with fire swords and flailing fire whips on the skin can be quite exciting at a goblin ball. I love the variety of my work and seeing children’s faces light up as they see a fantastical creature in front of them or adults faces being mesmerized by the spectacular creations.

These can be seen on https://beetlejuicecircus.weebly.com/

I’ve had the chance to work in so many places: prince’s parties in an enchanted forest with lumberjacks marching through, a fabulous opening of a bus station with the wildest dancing to superb band, performing with giant puppets at Wembley stadium in front of 80,000 football supporters, and being a rollerskating bauble and starting a huge snowball fight for children that were terminally ill. These have been some of my special memories.

I aim to help create a more imaginative world, a world of inspiration.

An artist. One of my earliest memories was being given some paints and a pure white sketchbook. I was really enjoying the vivid delicious pure colours that come out in the sketchbook.

I think an arts background is really useful in the performing industries as you can visualise costumes, backdrops and the whole creation in your head. It’s great when it all works well.

I had previously been making exotic handmade colourful waistcoats but was getting a bit repetitive having to reproduce replicas when people wanted one in a different size. Becoming a stilt walker was a breakthrough moment for me as it made me realise I could make elaborate costumes and wear them on stilts. 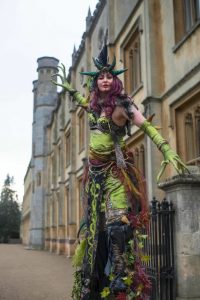 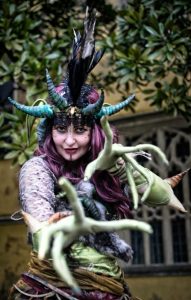 Everywhere I look. As a trained artist I could design endless new costume ideas. Often the process of making them will lead to the next idea. For example, when a piece of fabric gets stuck in the sewing machine and creates a great effect. Sometimes I get inspired by the way light plays on fabric or the scale of a huge structure or creature, or by historical costumes. It’s often the fabrics that suggest the next costume so I am a big collector of fabrics and other embellishments, waiting for the right bits to come together. I just wish I had a studio to put it all in!

Rubbish. Just do it, if you love it.

The creative world is a whole different way of seeing the world, but it can be tricky having freelance work and not knowing when the next job is coming in. The endless instability of work can affect your social life too, due to wanting to be able to take any work coming up so not making plans ahead with friends.

Having talked to a friend who went down the safe sensible job route but missed out on their creative side, I thought that it’s a shame these worlds can’t cross over more.

Kevin who taught me stilt walking and stilt dancing.

Archaos, Mutoid Waste Company and Arcadia who I got to perform with at Glastonbury doing angle grinding and fire flailing. We were on top of a mega truck surrounding the spider, where us flies were being cannonballed into the spider web whilst huge fireballs were boosted into the air.

Ridley Scott, the director of the Bladerunner, who has such an intricate vision.

Iris van Herpen, the fashion designer, especially her sea creatures designs. I love her for her originality.

Alexander McQueen for all his creative ideas.

Halo Jones from 2000Ad, for surviving in a bleak futuristic city with her robot dog. 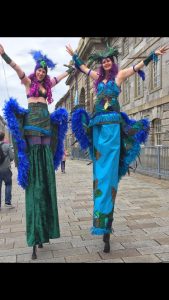 Relentless optimism. Sprayed on the bear pit (a pedestrian subway) in Bristol. Keep going even when all the doubts are sat on your shoulders.

Fiery orange like a sunset over the turquoise sea. Except that as a crayon, it would probably melt and roll off the table and head to the sun. Like liquid fire.