I describe myself primarily as a mime, but I’m also a clown, puppeteer, dancer, teacher, writer and director. (It never occurred to me that I should speak on a stage.) I began working as a dancer at the age of 18, after training at the Royal Ballet School. So I have been treading the boards for 52 years.

Since 1976 I’ve been performing mainly solo shows worldwide. I’m usually accompanied by my partner Matthew Ridout, who takes care of all things technical. Before the ‘90s performances comprised of contrasting sketches, the subjects based on things like revenge and sympathy, accentuating the idiot in all of us. Shakespeare has been well represented with:

Our Shakespeare toured internationally with all wonderful Shakespeare’s words removed. 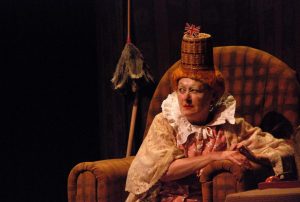 Since 1990, when I received some influential advice from Simon McBurney of Complicite, I changed my style and the shows became comical dramas with one character developed over the performance. These included: Elizabeth’s Last Stand, Mozart Preposteroso, And the Ship Sailed on (with Sally Owen) and Exit Napoleon Pursued by Rabbits.

When I was a baby, my dad looked at my hands and decided I would dance. He didn’t look at my feet very closely, which were shaped like his and not ideal for pointe work. But I became thoroughly hooked on ballet when I was plonked in front of Swan Lake at the age of 4. From then on wanted to be Margot Fonteyn. In spite of failing miserably at this, I have never regretted a moment of dancing.

I saw Marcel Marceau in London when I was 16 and was entranced by this extraordinary artist. At the time I was still set on being a dancer, but eventually realised I was merely a useful dancer and that I could use my training in a new wordless career. So I trained at Ecole Internationale de Mime Marcel Marceau in Paris. At the time I had no idea there were other mime schools in Paris.

Mimes are the cartoonists of the theatre so animated film and cartoons are big inspirations too.

Donald Duck was my favourite Disney character (I couldn’t stand Mickey Mouse). I

Generally, challenges now are physical ones. I have to be careful not to injure myself. I can’t throw myself around the stage as I used to. I have had to swap physical prowess for deeper artistry. Being a mime has advantages though. I can be ageless on stage.

I was told once by a famous theatre director that mime is the death knell of theatre, an attitude born out of deep ignorance. As mime is so rare, it’s a mystery to some who should know better.

It also never occurred to me to feel inferior to male colleagues. In my younger days, people came to see the ballerina, not her partner, who was deemed to be her support act.

It would be hard to make it in classical ballet, but it’s never too late to explore talent, as long as you have one. Experience of life will be a boost. 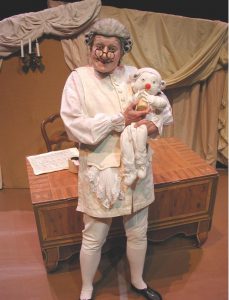 The great English ballerina Margot Fonteyn, who enchanted me with her wonderful stage presence. Everyone fell in love with her and her utter charm. I was lucky enough to share a dressing room with her once. She was very gracious and surprised me when she laughed. She had a witch’s cackle!

Marcel Marceau was the most extraordinary mime who at one time was the best known Frenchman in the world. His work showed an ever-optimistic human fighting silently and alone in an ever challenging world. He treated his students with respect and care, always with a twinkle in his eye. He had a wicked sense of humour. I’ve never met anyone more passionate about their art.

Jean Louis Barrault played the mime Baptist in Les Enfants du Paradis, which is one of my favourite films. He too was a wonderful mime and was very approachable and modest. I shook his hand once and dried completely. He saved me by asking if I was a dancer.

Black (if that is a colour) because you can outline things. Or Red, in all shades except pink.

Red is warm and dramatic. And red roses are my favourite flowers.

Learn more about mime at one of Nola’s upcoming workshops. Multiple dates this summer in Järvso, Barcelona and Gothenburg. For more details contact Nola at nolarae@talk21.com.