I’ve worked professionally in the entertainment business since I was 29 – so for 39 years!

I did a Performance Honours degree in Middlesex University, after which I started my own business in ‘performance based promotions’ using the talented people I knew from the course! I was given the Telegraph/Heineken award for ‘New Business of the Year‘ in the early ‘80s.

I then joined a Theatre group to obtain my Equity Card. Next was ‘Newpalm Productions‘ in North London, where I spent 4 years as an actor in rep and summer season. Theatres up and down the UK…

John Lambert, director of Q20 in Bradford, then asked me to do a show called ‘The Circus of Mazelek‘. There I learned many circus skills like tumbling, stilt walking and juggling. John was an established clown and he invited me to be his partner. So we went on the road and spent 20 years doing a double act ‘Manji and Mo.’

Finally, we represented Britain in Japan (all expenses paid!!) in the first International Clown Exposition. I still perform regularly with Q20. 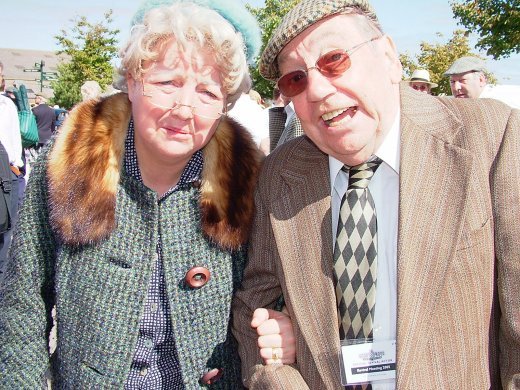 When I was 7 years old I wanted to be a poet like Burns (I still write and perform poetry but not for a living).

Also, I did love animals so I had some thoughts of being a Vet. But my teachers thought this was ridiculous as I was dyslexic

Teachers got me involved in drama groups and productions (as something to do outside of my home, as I had a lonely and rather abusive childhood). Theatre folks felt lik a close family to me.

And, although I was sick with nerves, I enjoyed the production and loved the feeling when the audience applauded us. Unfortunately, I was very shy, so I couldn’t push myself forward – I had to start in the background and gradually progress as I grew up. Production helped me learn to be large on stage and fake confidence! I used this to survive.

Then, one day, I saw Doris Day (whom I didn’t know) at the cinema in ‘Calamity Jane‘.  In the role, she was a gentle soul and a tomboy, but they made her look accident prone and awkward… just like me! I was totally hooked. It was like an epiphany… SHE could do it and therefore, so could I!!! I was so naïve!

The situation at home wasn’t great. I was an unwanted 5th child to a family that couldn’t afford me and who were fed up with more mouths to feed than they could afford. So my obstacles were:

I find inspiration from two sources:

A). One from within; that child I once was who had nothing, but who craved to play and create. This playful child-self feeds all of my work (creatively and sensitively). She has the energy of someone who wants ‘to let loose on the world’ after being restricted!

B). The second source is the beauty and resonance from all that I see around me. I have found that compassion and awareness are creativity’s playmates. We are amazing creatures with spiritual capability. If you create… you leave something of yourself with everyone who is exposed to that new experience.

The main block is other people’s perception of what I can or cannot do without risk.

‘It may sound a bit old…67-year-old woman…’ Of course, there are bodily changes that restrict some of the more youthful things I’ve done in the past, such as tumble or perform on a trapeze:  I’m certainly less able to bend and jump the heights I once could, but I am still pretty flexible and strong.

I’m able to walk on stilts without trouble for long periods. And if there’s an opportunity – I still clown and do pratfalls etc. I possess this ‘silly streak’ and it’s provided me with a comedic repertoire that doesn’t seem to diminish. Other people, however, do not book me unless they know me. Luckily people do know me!

What????!!!! Nothing can be too late to try! Though you may have to work harder to attain the grade you want. If I worked out in a gym, with a trainer, every day, for 4 hours, I could still do trapeze… but I want a life!! haha.

No… never worry about starting late just be prepared to work. I didn’t do circus skills until I was way in my mid 30’s. As long as you keep your body strong and fit, there’s not much that will stop you enjoying a good career.

I don’t have any idols. But I do have huge respect for the pioneers of physical comedy, such as Charlie Chaplin and Laurel and Hardy etc. Their influence is as good today as it ever was.

I also have people I love and acknowledge for their hard work and talent. They are not famous yet but they have performed with heart and soul over a very long period of time. They’ve given people so much. (Many of the performers of Q20 are in this bunch of people.)

“It is the influence you leave behind you in this world that matters the most”… Make it GOOD!

I would be purple. It’s a deep and positive colour. It represents wisdom, dignity, devotion, peace, mystery, independence, and magic. I am a brave person and try to live life kindly. Purple is my colour.