I’m an actress, director and producer. 7 years ago I founded the So and So Arts Club, which now has around 1200 members in 9 countries. Since then I’ve produced 6 festivals, 2 rep seasons of new writing, and nearly 100 paid rehearsed readings. I’ve directed several premieres of new plays and have taken plays to Edinburgh and New York. In 2017 I directed the first ever Kyrgyz language production of Macbeth at the State Theatre of Kyrgyzstan.

Next year will be my for 40 year ‘acting anniversary’. In that time I appeared in 6 West End shows, was a member of the Royal Shakespeare Company (where I played leading parts over 3 seasons), worked in TV and theatre as an actress, and directed theatre.

My latest project is a celebration and curation of the lives, stories, work and achievements of women over 50 all over the world. I’ve been especially interested in developing work which celebrates women and gives the disenfranchised a voice. This was the focus of my two biggest month long international festivals – Women and War, and Women and War Exodus.

When I was a kid I was always dressing up and bullying my sisters into appearing in made up plays. I had the brass neck to charge my parents and neighbours admission to watch them too, so I guess that was prescient of the future person I eventually became.

I have always loved painting and sewing as well, and I’m generally pretty artistic. I used to write tortured poetry which I re-read recently and which afforded me a good laugh. I have always written stories and observational pieces. I was reasonably academic but always leaned towards the world of imagination and storytelling.

I knew that I wanted to become and actress when I was at primary school and was promoted from being a tree to the wicked witch in Snow White. I made my debut in a bath cap bedecked with pipe cleaners in lieu of a wig. I instantly felt at home and from that moment on I pretty much never deviated from that aim.

I discovered by the age of 26 that I was also interested in directing. It happened when I was directing my first play about an actor losing to play Hamlet in a Break From a World Tour of Hamlet in which I was playing Ophelia. 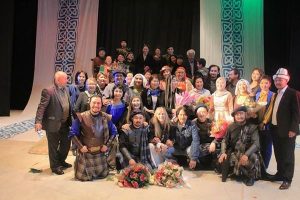 The three biggest obstacles in the pursuit of my career were:

I find inspiration in other people’s talent and achievements. But in some ways more importantly in the quiet gallantry of so many people, particularly women who keep the world turning. Through the Women and War festival I met so many remarkable women who had not just survived but soared like phoenixes from the ashes. I’m inspired to seek out ordinary unsung heroes and try and tell their stories.

The challenges you face in this industry are a reflection of the ageism we see in society as a whole. For women you’re generally regarded as asexual and there seems to be a feeling that all the agency you had in your youth has evaporated. I can say that I started a huge independent arts company after I turned 50 and I like to think that the fat lady isn’t even in the building, let alone singing.

In addition there is no support for mid career or re-entering, or indeed for new artists who come to it later in life. As a WASPI woman I’m all too aware of the fact that we have to support ourselves as we have no right to a tiny state pension until we are nearly 70. So we must be brave and continue to reinvent ourselves and challenge the idea that we are somehow past our sell by date. 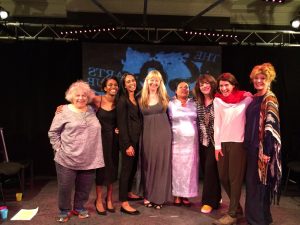 I hate all the “age is just a number” tropes, they are not true. But I think we have to turn it around and make it a positive thing. To feel confident that we have more to offer because of our age, not less. I’d say go for it, don’t be put off by other people’s expectations or the limitations they impose on you.

One of the good things about getting older is that you care much less about what other people think of you. It’s hard as there aren’t grants, schemes, etc. aimed at older artists. But we’re working hard to try and change that. So have confidence in the wealth of experience and skills that you have to offer. You’ve been on the planet for that much longer!

That’s a hard one. There are many people, both men and women I admire. Actresses such as Gena Rowlands, Penelope Wilton, Michelle Obama. Women old and young who stand up for human rights and the rights of other women in particular. Again I’ve met many unsung heroines who have lived their life with great grace and courage and it’s my ambition to share their stories as well as those of the more obvious game changers.

Throw your bonnet over the windmill.

I’d like to be what I call Catholic blue. The colour of a deep summer greek sky. It’s a colour I love and it’s almost impossible to recreate artificially.

Meet Sarah at We are Here Project, which will take place on 30 Oct – 3 Nov. We Are Here is an ongoing curated exploration, documentation, and celebration of the lives, achievements, journeys, and stories of women over 50 from all walks of life and from all over the world. Sarah would like to welcome any participants who want to celebrate any women over 50.