I’m now 61.  My working life in professional theatre began in the 1980s in Germany, where I started as a director’s assistant and technical/lighting operative. Until 1994 I worked there as a dramaturg and director, also writing and translating plays and operas. I worked in big and small theatres and opera houses with some big names and met many inspiring people.

I had a baby and moved from Germany to England, so I started my career all over again. I became a drama teacher and ran my amateur drama group. I put on plays for the Brighton Fringe and the Brighton Early Music Festival. I directed an opera (Alcina by Handel) for which I wrote a new English libretto. My last show was a concert with 3 choirs, soloists, musicians and dancers called The Feast of Fools.

At first, I wanted to be a surgeon or breed very large horses in Australia, then a musical performer.

I’ve always loved ‘travelling folk’ like Roma, circus people, carnival travellers, and rock musicians on tour — so the theatre was the next logical and attainable place. When I was a child I did loads of drama and sang in concerts. The pull was always strong.

Then I became an extra in plays and films where I met lots of fascinating people. I knew it was where I belonged. I thought I needed a degree to get into theatre so I wasted years going to universities and getting a Master degree that nobody ever wants to know about.

Eventually, I became a director’s assistant in film. Working with the best actors made me realise that I needed to be in an actual theatre where the work is slow and deliberate. I found my place in creating, organising and guiding. I tell the performers that all they have to do is bloom and leave the watering, feeding and sunlight to me. 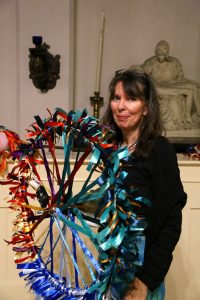 Everywhere. In books, music, stories people tell me. In my head. My mind gives me what I need.

Well, I look younger than I am, so people trust me when I meet them face-to-face, but if I applied for a job on paper, I fear my age would exclude me.

I’m in pain at times and have less energy than I used to. This never stops when I have work but I feel like it stops me trying to get more. I have slowed down and become a bit fearful when I’m on my own.

It’s not too late, go for it. You have life experience which is something young people do not. Also, everyone has self-doubt. If they don’t, then they’re not thinking right.

There are many women I deeply admire (and a few men). I learnt so much from the ones I worked for and with, and watched over the years but I don’t idolise anyone. They’re all just fallible human beings.

This too shall pass. I’m an optimist.

I’ve always been orange, sunny and pumpkin-like; positive and spicy like a nasturtium; sweet and bright like a rose called Xandra from my childhood garden.

Connect with Saskia on Twitter and Facebook, or find out more about her work as deputy store manager at Gladrags Costumes.