I’m the Artistic Director of a multi-disciplinary, participatory arts company, which means I do everything from writing and devising shows, finding partnerships, raising money, booking teams, delivering shows as well as performing in them, to putting out the chairs for the workshops and cleaning the toilets!

I started my career as a performer and director. I’ve always been working in devised theatre. Very early on I discovered clown and new circus training, which is where my theatre style sits most happily. My performances are full of playfulness and direct contact with the audience, no red noses and curly wigs. I’ve been doing this since 1983.

I wanted to be in charge and a ballet dancer.

It was so long ago that I can’t even remember now. It kind of crept up on me… My first Glastonbury was pretty good though.

Well, in the old days unless you were proper skinny, and cute, and willing to go along with a lot of inappropriate attention, you didn’t get very far. So sexism, initially. I liberated myself from it by working in a women’s company and moving to Stoke-on-Trent, where at least you could see the misogyny coming a mile off. I also started to work in Outdoor Arts, where although we were quite wild, everyone was treated pretty much equally.

Institutionalised sexism was pretty much everywhere. Our women led theatre company, Beavers, (we could get away with this name because the internet didn’t exist), wasn’t taken seriously because we were JUST a WOMEN’s theatre company. We’d turn up at a gig and the booker would look over our shoulders for a bloke who was “in charge”, or who might have at least driven the van.

Then, access to funds. Though Stoke being a super cheap place to live meant we could live on £50 a week. The downside to that was the lack of a scene here. We spent a lot of time travelling and not at home.

My colleagues, Gill Gill, and Hilary Hughes with whom I started the company. Both 10 years my seniors so they had had to deal with proper ‘70s theatre bollocks and had taken no prisoners – complete heroes.

Invisibility, which turns into the ability to surprise people because they didn’t see you coming.

Some funders and bookers might think that you can’t offer anything new because you’re not young. When in fact, lots of young performers are just re-hashing the stuff that’s already been done without having the knowledge of their history.

I think knowing the history of your industry is a real issue. How do we make this sector a real thing unless we understand our history? Imagine a theatre writer who had never encountered Shakespeare, whether they got him or not?

And to be honest I’m tired, overweight, and have grandchildren to think about. I’m slightly worn out by the slog. So I’m overcoming that every morning. 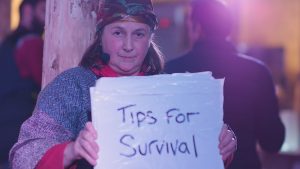 Say yes, then sort it out later.

Pay attention when you have a strong positive or negative reaction to something. Trust your instincts, follow your nose, and be kind to people – they’re being mean because they’re sad or scared.

Work hard but don’t be hard on your work.

Catch Susan and her Forest of Dreams at the upcoming Timber Festival on 5-7 July.