I’ve been modelling, singing and playing in bands since I left school. I performed around the country and in Europe. Punk folk (Shelly’s Children and Cuckooland both bands endorsed by John Peel), dance (Dubrovnik), choir and electronica (Barrios Kingdom).

Then in 2002 started stilt walking, and also dancing in a comedy troupe Le Pants. Again toured all over the country and abroad.

In 2011 an illness stopped my singing career so I moved to stage management and continued stilt walking. 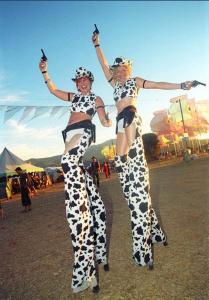 Famous! I wanted to be a singer, a dancer, or a showjumper.

I really only realised this is what I wanted as I got on a plane to a gig in Spain or Holland, or somewhere else. There was no Eureka moment… just a big warm glow.

General expectations. That may be shifting but most people still conventionally want and expect young beautiful stilt walkers. So the challenges may be in my head, I guess.

My confidence took a major battering when I was ill. I was hospitalized for 2 months in isolation, and it took me more than a year to learn to breathe, swallow, drink, eat and speak again. I have fairly major nerve damage in my tongue, mouth and neck… and that kind of put a crimp in my life. 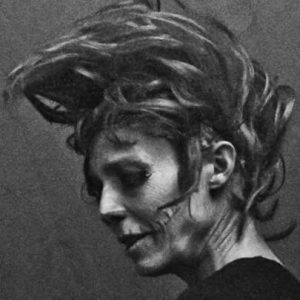 After I was ill and trying to recover some physical strength I was asked by Swank/Cathy Pease to do a gymnastic/comedy street show with her and Heather Pilkington – the Sputnika Sisters. That was a ridiculous amount fun. Being headhunted felt great and boosted my confidence, which at the time was at rock bottom. Also mine was a silent role, perfect for me at that time, and just well because my speech was almost incoherent.

It’s never too late.. so don’t listen till you hear the answer you need.

Arm yourself with as much information as you can.

Surround yourself with positive, enriching people (they will bring out the best in you). And properly submerge yourself in your chosen field.

Be honest and realistic with yourself and those around you. People will see through any bullshit.

Be gentle with yourself too, even superheroes need to go offline sometimes. 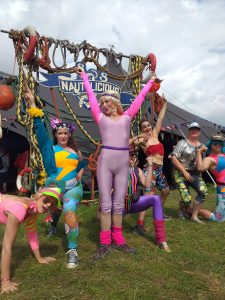 Annie Lennox, a truly brilliant singer and performer. Freddie Mercury and Stevie wonder for their command of stagecraft and audience. David Bowie and Madonna for reinventing themselves. John Peel for his fearlessness and self-assurance. John Cleese for his sense of ridiculous. Emma Thompson, Judi Dench, Kurt Schwitters for blurring the boundaries. Steven Hawkings for his vision. Bill Bryson for explaining it and making it accessible.Tommy Cooper for his exquisite timing. Sandi Toksvig. Elizabeth Frink. Morecambe and Wise… I could go on and on.

Inspiration lies everywhere. If only people would open their eyes and minds. I’d like to know who their heroes might be… Because we build on what has gone before.

All you can do is all you can do. We only get one life, so be brilliant, and squeeze as much fun and goodness out of it as you can, from every occasion.

I’d be the iridescent one. A little shimmer goes a long way.

Teph describes herself as a “pretty handy sort of person to have around.” She’s a great stage manager who’s always full of ideas and who never lacks optimism. Get in touch with Teph to discuss future opportunities by emailing her at tephkay@yahoo.co.uk.