I’m a mother of two grown-up women, I’m severely dyslexic, I’m 52, and I am from the Black Country. Those things do not define me but they definitely shape me. I’ve been working for 32 years in this industry. I work as a writer, actress, a puppeteer, a director, a mentor and an educator.

I’ve worked for a Portuguese company for over 23 years and have had plays with them put on at the National Theatre in Portugal. I have had over 23 plays professionally produced. I’ve worked for a Catch a Media, which is an award-winning SRE company, for about 15 years. I have toured shows with Korean companies internationally too. I also work with the Birmingham rep’s tour of Anita and me, as well as many small-scale productions.

When I was a kid I wanted to be a horse. I spent a lot of time trying to be a horse. On reflection this makes a lot of sense. I think I was attracted to the essence of something and wanted to emulate that in the best possible way as a human. Ridiculous as it sounds I think it was probably a good grounding in creating characters and developing performance.

Because I was dyslexic and struggled so much at school I think I had no expectations of being anything. As I got older I remember thinking if I could read and write; I would have loved to have been a marine biologist.

Towards the end of primary school I remember a teacher saying that I should be an actress, that it would suit my personality and abilities. This was a realisation that there was something that I could do, a potential career.

As a writer my first meaningful play was called “A Play on Words.” It was all about my experiences with dyslexia and struggling in education. I toured it round for nearly a year, it was a one-woman show. At the end of one show a couple came up to me and told me that their son had committed a suicide as a result of his struggles at school. Immediately after that a young man came up and said “you know how I feel.” A combination of these two things have compelled me to write ever since.

As well as doing theatre work, I work as a mentor with a company called Gazebo. This work involves supporting young people in very difficult situations. I’ve also worked for Women and Theatre on their probation programs, as well as with people with additional needs and those in education. Some are utterly inspiring, not because of their success because that often isn’t the case but because of their ability to survive. Their honesty, their openness and their generosity in sharing their experiences are remarkable. These are the stories I want to write about. 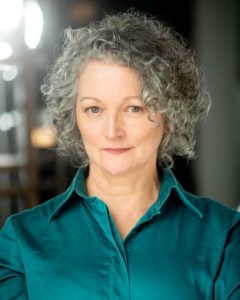 I also get inspiration from the amazing and supportive women who surround me, from my daughters, friends and the people I work with. In truth without their support I’m not sure how things would be but they make my life good.

There are all the obvious challenges to do with not feeling well-established enough but I think right now the challenges are to do with menopause. I find learning lines harder, loading and unloading vans more difficult, and sometimes I get so hot in a show that I think I might pass out. Having said that, the years of experience and the emotional journey that I have been on brings richness and, I hope, a humble generosity and wisdom that is definitely worth utilising.

I think I would say “tell them to F@*k off!” When you get to this age you have a right to make your own choices about your life. Get a check on what you think success is. I’m not rich, I’m not famous but I do survive. Finding work is really hard sometimes but I manage to pay my mortgage. And sometimes, just sometimes I feel like I’ve made a difference. If your motives are similar then choose to work towards what you want rather than live with regret.

I think probably I don’t! But I have lots of people in my life, some famous but mainly not, who I absolutely love, respect and admire for who they are and what they do.

“Get up, dress up. Good things are coming but you have to go out to meet them”. And more recently “This too will pass.” 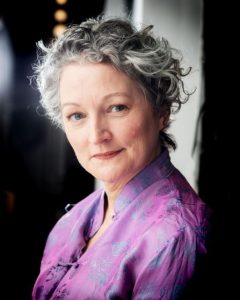 Purple. I like it, it’s positive. And I hope I am, most of the time.