I’m a circus performer, specifically an aerialist, but I also stilt walk and play with fire. I’ve been in the industry for about 23 years.

I was one of the first wave of circus performers taking the clubbing scene by storm in the late 90s’, early noughties. My collaboration with Gareth Bailey pushed the boundaries of doubles rope as an artform. I have toured with various circus’, both traditional and contemporary including the award winning No Fit State Circus. I am a core member of the Incandescence Circus Theatre Company, and have performed with them all over the world.

My latest creative project is Corvus Angelicus, a series of winged aerial performances: Corvus (the black crow); Angelicus (the white bird or angel) and The Red Dragon. This project has combined my love of making things with performing which has been creatively very satisfying.

In addition to performing, I’m also an aerial instructor and through teaching at institutions like Circomedia I have influenced the next generation of aerial artists.

I have a vivid memory of being a kid playing leapfrog in the front garden with my sisters and seeing my mum watching us through the kitchen window. I felt sad that she was inside (cooking us dinner) whilst we were outside playing, so I went to ask her if she wanted to join us but she said no. I assumed it was because she was busy, so I offered to help after she’d played with us for a bit. She declined again and then I had the shocking realisation that she did not actually want to play leapfrog! How could anyone not want to play leapfrog? I decided there and then that I would always want to play leapfrog. I even called one of my tricks on swinging trapeze “the leapfrog”.

When I was 14, the horrific famine in Ethiopia hit the news in the UK. Seeing the disturbing images on the TV made me want to do something to help. I heard about Voluntary Service Overseas (VSO) and that became what I wanted to do when I grew up.

I had my first go on a trapeze at Glastonbury festival, and I instantly loved it. I had a feeling that ‘I could really do this’, but I was on a different mission. I was a full-time unpaid worker at Leeds Development Education Centre, having completed a degree in Politics at the University of York. I went on to work with Oxfam in East Africa and with VSO in Central America.

Returning to the UK I felt I had done all the things I’d dreamed of doing. It wasn’t as nice as it sounds. I needed a new dream.

After sending for a prospectus for an MA in Gender and Development studies I saw an advert for a trapeze class. My punch in the stomach moment came seeing the prospectus sat on my doormat a week after it had arrived as I rushed out excitedly to another aerial class. I realised then that if I couldn’t even read the prospectus I wasn’t going to read all the books and write all the essays, and that if I wanted to be a trapeze artist I had to do it now. An MA could wait until I was 50, being an aerialist couldn’t.

But sexist and ageist attitudes don’t help. Some clients really just want models in the air. One client even said they would not have employed Gareth and I, had they seen headshots. They were really glad they hadn’t seen them because they loved our act.

Our economic system doesn’t help either. Making a living from your art is hard. It’s insecure,  even more so when that art involves your body. Having resources to take time off, see physios, buy equipment, go on training courses, etc, makes everything easier.  Not having those resources makes everything harder. 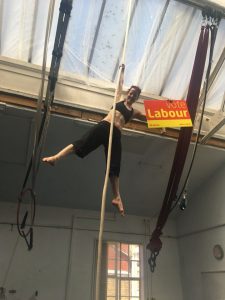 It’s a cliché but anywhere and everywhere.

I have always enjoyed puzzles. The puzzle of the rope inspires me. The endless possibilities from one piece of cord. We can knit, crochet, weave, knot, make nets, etc., and then you put gravity and a human body or two into the mix and just wow.

Often other people inspire me. For example, a friend asked me to be in their music video and enquired if I had some wings I could wear. I told them that they would probably get in the way on the rope, but by the time they replied with “doh, yeah scratch that”, I had already started getting inspired with the puzzle of what would be possible. A piece of graffiti art near our training space inspired me to make the wings huge and black, and using a raggedy bin liner to wrap a gift inspired me to not use real feathers. And so Corvus Angelicus was born. With hindsight I can see that Corvus was my response to my mother’s passing. Even after I’d made enough feathers for the wings I couldn’t stop making them. I ended up making over 5000 feathers by hand using drinking straws and gaffa tape, and Corvus expanded to include a whole family of stilt walking pogo sticking crows.

The obvious challenge as an aerialist is the sheer physical demands aerial places on the body and keeping the body injury free. I’ve been pretty lucky on this front. Long may this luck continue.

Ageism is another obvious challenge. People assuming aerialists have to be young. I’ve lost count of the times I have been asked “so how long do you think you can carry on doing this for?”. Ageism intersects with sexism. It’s more acceptable to have older male circus performers than female ones.

What a pile of bollocks!!! Are you dead yet? Well, it’s not too late then. 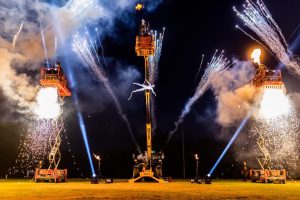 I don’t do idols really. To idolise someone involves putting them on a pedestal and people invariably fall off their pedestals. But I’m slightly in awe of people like Jeremy Corbyn, Greta Thunberg, Akala, Alexandria Ocasio Cortez, Naomi Klein, George Monbiot.

Feel the fear and do it anyway.

Life is a story, make it a really good one.

Connect with Lyn on Instagram and see her Corvus Angelicus and The Red Dragon on Facebook. Want to learn some aerial or book her for your event? Join Lyn’s Facebook group or check the official Incandescence website.