My main work is the interactive drag ballerina act – Madame Galina, which I perform on variety and stand up bills, for corporates, the WI, private parties, etc, and which is central to my current book tour. In 2005, after I performed opera onboard H.M.S. Victory at the naval supper marking the two hundredth anniversary of the Battle of Trafalgar, Combined Services Entertainment offered me an audition as Madame Galina.  Thinking this would be for officers’ mess at the Park Lane, Hilton, I signed on the dotted line

The gigs were in Iraq and Afghanistan. I’ve written about these tours in My Tutu Went AWOL.

Wonder Woman, the ballerina in the musical box in Chitty Chitty Bang Bang and estranged from my psychotic parents.

From the age of four, I performed with my dad, country and western singer Terry Edwards – so, there was no waiting for an opportunity to perform to come along. We toured municipal halls renamed the Ponderosa or El Paso; sharing bills with all-singing, all dancing animal puppets, telepathy acts… and whatever you call the troupe of women in spangled leotards who tittuped giant bowling balls up and down ramps.

When I was eleven, I decided to go ‘legit’. I auditioned successfully for Southwark Cathedral, singing “The Old Rugged Cross” and a typical country song about the agonising death of a working-class child.

Mine wasn’t the expected treble voice. For seven years, I’d yodelled songs about failed crops, failed marriages, failed nuns, haunted mines and christening your son Susan the day you abandon his mother, so he will have to fight his way to being tough, which backfires when you finally meet and puts you through that saloon window. My voice was mentally high and flexible, big, and, at times, mawkish.

It wasn’t the sound of a good boy. But – ask the Provost – I always sounded desperate to get whatever it was I prayed for, nicely.

Stephen Fry said about first reading P.G. Woodhouse, ‘‘It was like something I’d once known very well, but temporarily forgotten’. I felt the same seeing ballet for the first time, aged eighteen working as an usherette at Covent Garden. I became obsessed… obsessed… with dancing the Swan Queen. The doom-laden wing movements; her mimed narrative about the evil being transforming her into a swan to live forever by the lake of her mother’s tears. The sheer joy of classical ballet steps, somehow acquired as I went. 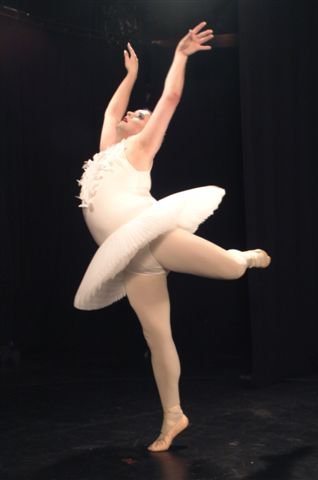 Round the pillars in the foyer, with a rubber glove on and a bucket over my arm, emptying ashtrays…  My whole Galina act – the gags and interaction – is really about me getting an audience’s permission to do my nice dancing.

The first obstacle was that I was studying classical singing at Guildhall.

I debuted Madame Galina in my second year, opening the first ever Rag Week Revue in Swan Lake, opposite the Prince Siegfried of star baritone Peter Snipp. The head of voice asked me to leave college at the end of that year. I was there on a vocal studies course…but seemed to be spending all my time preening imaginary breast feathers in the library, crying lakes of tears down the Student Union windows or turning lame ducks in the German song laboratory.

Or, as my General Musicianship professor put it, ‘Too little Schubert, too much Sugar Plum.’

At the time, hoiked out of college, there was no burlesque and variety scene as it exists today. I taught singing full time at the Guildford School of Acting and – other than the odd Galina for friends’ parties or charity events – trod water till Duckie, Club Kabaret, the Cobden Club and Medium Rare sprung up from the mid-nineties onward. Emily Latham was a guest at one of those parties, and arranged for my audition at Club Kabaret, where I was a resident turn from1998 to 2002.

Overhearing conversations on buses and in the local cafe!

And many of my peers, of course. Not just from their work, but from their being good company members. Chris Green, Janice Connolly, Lizzie Roper, Jillian George-Lewis, Professor Vanessa Toulmin, Ursula Martinez, Marissa Karnewsky, Sorcha Ra, Katherine Ella Boo Hardwick; Kathryn McLaughlin, Jess Love – actually, more than I can think of here.

Couchsurfing where I can’t have the light out when I want and where my (kind, yes) hosts might see me in my non-matching pyjamas.

And I’ve lost the belt for my tartan dressing gown.

As Lizzie Roper says, ‘If you burn to do it, you are going to do it.’

In the dressing room, ask five questions in two minutes, don’t recite your CV, bear in mind that nobody but you will ever care about your self-projected status.

Fiona Chadwick, a former principal dancer with the Royal Ballet. I actually met her, just as she was stopping dancing, because she married the son of a woman I house-sat for. She didn’t get taken into the Royal Ballet from the school – she would be regularly seen in open classes, putting her left pointe shoe on at the end of centre for the fouettes – but eventually worked her way up to becoming prima ballerina at Covent Garden.

Fiona’s wasn’t the ideal physique for ballet – she said so herself. Her legs were too short, her neck too long, her hips boxy. But she had a miraculous ability to disguise this on stage. She knew, for example, how much more fished one foot needed to be than the other. Teaching me Giselle’s Act Two pas de Deux, she told me to get my act out there and seen; to never believe my press – good or bad – and to always try and be useful.

And as a singer, I’ll name someone I was at college with – Peter Snipp. He was as pretty as his sound – still is – the cliched diamond in the rough. Lisa van Jaarsveld and I would cheat for him in academic exams. He was constantly that one strike from being shown the door, before the sheer gorgeousness of his singing would save him. I can still conjure the image of him doing some Brahms; the baby blues with the amazingly long lashes, wearing his burgundy leather jacket and barrow-boy loafers.

When we worked on the Revue together, he warned me, ‘Stop mythologising being a singer.’

The lemon yellow that glows acidic.

Iestyn’s memoir, My Tutu Went AWOL, is available from bookshops Amazon.  There is also an audiobook version on Audible, read by Iestyn and produced by Mornington Media, with full songs, ad-libs and bugger ups.