I’m an actor, theatre maker, writer and teacher. I graduated from RADA in ‘93 and have been working in theatre, TV, and film ever since.

In the mid-‘90s I started co-writing scripts with a great friend from University of East Anglia Sophie Vaughan. We created work for C4 and the BBC. We performed two London runs of our theatre show ‘Angel Filth’ in 2003 and in 2004.

I’ve been teaching work rooted in the Meisner technique since 2001. I currently teach at the Actors Centre, Arts Ed, National Opera Studio and at my own practice in Exmouth Market. My teaching combines core Meisner exercises with movement encouraging, spontaneity, authenticity and presence.

I’m currently performing my one-woman show ‘The Old House’, which is inspired by my mum and her journey with Alzheimer’s. It will be at Theatre503 at the start of July, as part of a week of curated shows on motherhood.

I wanted to be an actor from a very early age. My paternal grandparents were actors and I’ve taken my grandmother Lila Maravan’s name. My family nicknamed me Sarah Bernhardt with a handful of drama queens thrown in!

I remember seeing both RSC’s productions of ‘Nicholas Nickleby’ and ‘The Greeks’ and was bowled over by the worlds they created and how they engaged with the audience. I wanted to be like an actor from one of those shows. Billie Whitelaw or Roger Rees. 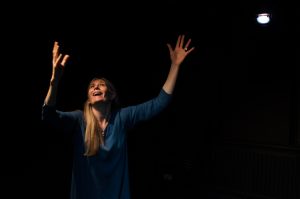 When I was little I used to attend a dancing school run by the brilliant and somewhat eccentric Miss Ballentine. We would do a performance once a year at Drury Lane Theatre in aid of the NSPCC. I can remember being about 8 and narrating a story. I was standing on stage feeling alive and in my element. I understood (although I couldn’t necessarily articulate it) the joy and power of performance and the possibility of connecting with an audience. I knew from that age that I wanted to be a performer and communicator.

When I was at UEA we did a show with Clive Mendus from Complicite. It was my first experience of devising work, and I loved it. Although I didn’t know it at the time, it sowed the seeds for so much of my most meaningful work.

When I left drama school I lacked self-belief and had become reliant on the approval of others. It has taken time to trust myself, value and enjoy affirmation, but not depend on it for self-esteem.

For some time I attached to the idea of how my career should be rather than embracing who I actually was. When my career didn’t unfold in the way I had expected it was tough and painful. However, through this so-called failure, I discovered my love of writing, teaching, movement and devising my own work. I’m now fully myself and I express creativity in more than one way. I determine my own creative expression. I have increasingly reconnected with the kid that performed on the Drury Lane stage all those years ago.

I have needed to challenge the voices both external and internal that said ‘this is the way it is’ and that I need gatekeepers to be creative or produce something. Of course being facilitated and supported is hugely helpful but what’s more important is trusting in my own artistry. If I want to be creative, there is no one stopping me.

Kath Burlinson, the founder of the Authentic Artist Collective, and her mentors, Paul Oertel and Nancy Spanier, have been wonderful teachers and friends who continue to inspire me. I love being a part of a community where age is no barrier and where I can continue to search for artistic expression.

I’ve been inspired by teachers who are challenging and encouraging but do it all with kindness. They create safe spaces to explore and risk, one step at a time. This has been the model of teaching that I’ve been inspired to adopt.

I love dance and dance theatre, and Gabrielle Roth’s 5 Rhythms Dance and Pina Bausch have been a great inspiration to me.

I’m inspired by artists who break the mould and tell the truth, those who challenge the status quo. Recent TV shows I’ve loved include Fleabag, Handmaid’s Tale, and The Bridge.

Bella Heesom’s ‘Rejoicing at Her Wondrous Vulva the Young Woman Applauded Herself’ was an inspirational theatre piece about female sexuality.

I’m inspired by my wonderful women friends and women who defy expectations and trail blaze. There are too many to list. I’m also a founder member of the Women’s Equality Party and am inspired by women who have the passion and tenacity to keep trying to make a difference.

On one level it’s a reality that casting becomes harder, especially in the commercial field. However, I’d also say that I feel more empowered and confident in being myself and in creating my own work. I’ve had some of the most interesting and fulfilling roles in my late 40’s and early 50’s.

I don’t believe it’s ever too late. We have to set the path as Rumi says “As you start to walk on the way, the way appears”.

I’m still exploring and discovering new creative expression, developing my interests and evolving my teaching practice. I think it’s important to counter the belief that the door is only open to emerging artists. My voice with regards to my show ‘The Old House’ has emerged in my late 40’s/early 50’s and I fully intend to keep emerging. 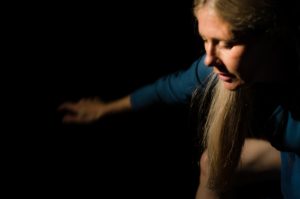 I try not to idolise people, but I admire and love people who are courageous and follow their truth.

Another Rumi quote again: “Don’t be satisfied with stories, how things have gone with others. Unfold your own myth”.

The first colour that came into my head was indigo and this is what I found about indigo online:

‘The blue in Indigo helps with communication…grants greater perception. It’s associated with devotion, service, honesty and dignity. It can, however, become impractical, zealous’ and in the spirit of my old friend Sarah Bernhardt ‘melodramatic’!’

Want to know more? Connect with Kate on Twitter @maravan_kate or visit her website for more information about her upcoming shows.