I’m a traditional singer. I sing unaccompanied ballads, songs I’ve written, and folk songs. I’ve studied Voice at RCSSD and had forays into jazz. I’m from Scotland so Scots songs are really my specialty. I also speak a few European languages and I love listening to Americana, Eastern European singing and anything a bit unusual. During my career I’ve toured around the USA, Canada, Russia, and all over Europe. I have made some brilliant friendships through my work.

I started professionally in the mid ‘80s, but I’ve been singing since I was in primary school. I love theatre and have performed as a singer in some professional shows including a big scale production in The Tramway in Glasgow, and with Dundee Rep and Communicado Theatre. I’ve also recorded quite a few CDs.

In 2018 I entered the Scottish Traditional Music Hall of Fame. This year I brought out a new CD album Shift & Change on Greentrax, which has had **** reviews. And I’ve been nominated twice for Scots Singer of the Year.

As well as being a performer I’m a musician working in the community. I have set up many choirs. I run masterclasses and workshops, and I have a following of lovely choir singers and audience members. I work with all ages and kinds of projects and I’m currently specialising in working with people living with dementia.

At the age of 10 I decided I wanted to be a singer. I wanted it to be my job. My pals and I would meet every week, we would play music and make song arrangements. I remember thinking back then this is what I wanted to do. I wanted to be creative.

When I started working with Janet Russell in the ‘80s in folk clubs and festivals. We had been going to folk clubs and concerts together and our first radio show was on BBC Folk On 2. We went to Bush House in London. It was really exciting for us!

Everywhere! On the streets, reading, listening to people, observing, and taking part in activities. My work is inspired by the people who went before like the Scottish Travellers and older folk singers. I’m also inspired by the wealth of resources about Scots song, the live performance of others and my own history of listening to a lot of diverse music (my brother used to bring vinyl records home), and music my pals and I shared and listened to.

Not being a “new thing”. My own sense of where I sit in the scheme of things, and the practical and admin requirements of even the simplest concert bookings.

If you feel and know it’s something you should be doing, then why not? I think we can all be cautious, but maybe a calculated risk is worth exploring. Be practical, but also know how much you want or don’t want to adventure. You have something unique to offer and if you don’t try you’ll never know how it all turns out! I don’t think age should come into play, but I know that we sometimes have that particular narrative running in the background. 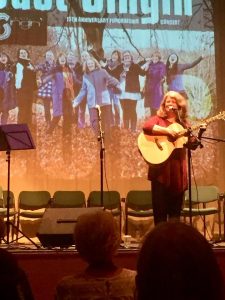 For all sorts of different reasons – inspirers rather than idols – some of them are ‘ordinary’ folks who are not famous, but wise and lovely. I love Joni Mitchell and Carole King, James Taylor and I love the singing of a wealth of folk singers I’ve heard. I don’t really like the word idol. For me other artists are more like ‘influencers.’ I think every artiste worth their sort is admirable but the word ‘idol’ is too strong.

Follow your enthusiasm and don’t compare yourself to others.

The multicoloured one. I’m curious about life and its diversity.