I’m Doctor Sparky, a Clown Doctor. I’ve been a clown doc since 2007. It’s one of my most favourite and fun jobs, and I feel very privileged to be one of the Arts Care in Northern Ireland Clown Doctors. My other brilliant work is with Amadan, a clown company based in Belfast. Currently, I’m in their production for young children called ‘Pink and Blue’. We’ve been touring throughout Ireland over the past 2 years. I’m also a complementary therapist and a Pilates instructor.

I was also a dancer since I was a child. I always wanted to be a ballet dancer and worked extremely hard at it. Due to several changes within my family, I stopped dancing and took up drama lessons. I was introduced to the world of experimental theatre when I was doing a Brechtian theatre project. I then decided to return to dance at Temple University, USA.

I went to New York, studied more, worked in several small companies, and taught and performed in the University of North Carolina. I also got to work as a dance director in a camp, where I met my husband. Then came to Northern Ireland and danced loads more, also did some acting. I launched a small company Pui Mosso Circus Dance Theatre and put on a few major productions with my friend Helen Averley.

How did I get into clowning? Someone once told me a long time ago that they were going to clown college in Florida, and I thought – I want to do that. So, 40 years later I got to do clowning. How cool is that?

Simple – Isadora Duncan cause she was revolutionary; Rudolf Nureyev cause I could jump as high as he could; Marcel Marceau cause he was just brilliant; and a mermaid cause they have great hair (I was 3 years old).

I don’t know when I realised I would be a performer. I guess when I was on a stage, in front of an audience. I’ve been performing regularly since I was 6, at that age I remember being called to the mic by the director to tell the audience how much love and joy I got from dancing. At that moment I felt on top of the world.

Confidence, money (having to have to work), and love relationships. Someone once said don’t take a ham sandwich to a banquet. I think I had one too many ham sandwiches in my life until I met my husband. 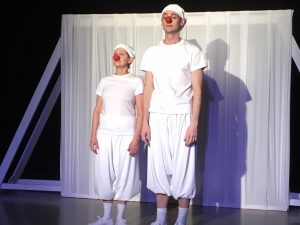 Paintings, other clowns, movies, poetry, and conversations with brilliant people.

Only myself. I’m not as active as I used to be in pursuit of work, and as I age I’m happy not to do that so much. I’m content with my lot.

I don’t look my age so I think people look at me and wonder. I’m still very fit and able to still roll and fall as I always did, so I’m not physically challenged at all.

Not to work with the fool who would say such a thing. I’d say look around and you’ll see performers come in a multitude of sizes and ages.

I don’t think it’s a motto, or maybe it is, but I tell my boys that life is long and you don’t have to choose any one thing to be or do. You mostly just have to follow your dreams and things will fall into its places. You will find your journey is a pretty thrilling ride. That’s actually several mottos…

If not now, then when?

I would be the overly used one that has other colours mashed into it. Because, well I’m 60 and I did loads of stuff and I still do. I have lots of bits to me that I’ve collected over the years.

Catch Jennifer at her upcoming Pink and Blue performance on the 19 – 21 of June 2019 in Limavady.